Taylor, at km 56 of the Alaska Highway, overlooks the Peace River and surrounding valley. In 1896, Donald “Herbie” Taylor moved west from Manitoba. First homesteading at Peace River Crossing, Alberta before moving to Hudson’s Hope in 1905 to become the Factor for the Hudson’s Bay Co. In 1912 he moved his family down river and became the first family to settle on the Flats, which came to be known as the Taylor Flats. Herbie maintained a Peace River ferry crossing for fur traders, prospectors and homesteaders.
A post office was opened in 1923 and the town was officially recognized as Taylor. The Peace River Suspension Bridge opened in 1943 and was the longest bridge on the Alaska Highway at 2130 feet. It collapsed in 1957 and was rebuilt in 1959.
Taylor’s economy has close ties to the oil & gas industry since Canada’s first natural gas pipeline was constructed from Taylor to the United States border in 1957. Taylor prides itself as a quickly growing business community with small town charm.

Taylor Info Centre is on the left if you are headed towards Alaska. 250-789-9015
www.districtoftaylor.com 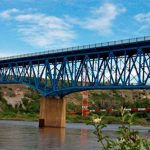 Peace Island Park has full serviced campsites available plus a day use area with water, firewood and boat launch. Explore walking and …

END_OF_DOCUMENT_TOKEN_TO_BE_REPLACED

an 18-hole championship course and a driving range in Taylor, about 15 minutes south of the city. A recently renovated restaurant is …