Skagway, Alaska is the northernmost point in Alaska’s Inside Passage, at the far end of Lynn Canal. In its heyday, Skagway was the boomtown gateway to the Trail of ’98 and the Klondike gold fields. The population has dwindled from 20,000 feverish gold seekers to about 1000 year-round citizens.

Streets once choked with gold-crazed stampeders clamoring to get to the Klondike and strike it rich, are now just as busy with thousands of visitors arriving by cruise ship every day! On a busy ship day, Skagway reverberates with many of the same feelings that must have been present during the Gold Rush.

Skagway is home to the White Pass and Yukon Railroad, the “Scenic Railway of the World.” It is one of Alaska’s most popular visitor attractions and should not be missed. This is more than a train, it is a ride through history.

Skagway is also the home of the Klondike Gold Rush National Historic Park, which honors the stampeders of the Klondike by protecting the historic buildings and trails of the Gold Rush era. On June 28, 1900 Skagway became the first incorporated city in Alaska.

One of the first white residents of Skagway was Billy Moore, a former steamboat captain. He believed that gold would be found in the Yukon and in 1887 built a dock and a trading post in anticipation of the gold rush. He was proven right 2 years later when prospectors began to arrive on steamships and prepared for their overland journey north into the Yukon to Dawson City.

The first part of their expedition was certainly the most difficult. Prospectors had to transport more than 2000 pounds of provisions over the Chilkoot Pass to Carcross. This proverbial “Ton of goods” was required for each person to prevent starvation in the remote Yukon Territory. In order to transport such large amounts of food and supplies stampeders were required to make many trips over the treacherous Chilkoot Pass.

Once in Carcross, they would need to build a boat capable of making the 600-mile journey north to Dawson City, via the Yukon River. Skagway’s neighboring town of Dyea was at the beginning of the Chilkoot Trail and what began as a tent city in 1897 quickly grew into a town of 3,500 with restaurants, hotels and saloons.

However, with the building of the White Pass & Yukon Railroad from Skagway in 1898, Dyea quickly faded away. The old townsite is now recognized as a National Historic Landmark even though there is hardly any evidence that the town ever existed.

Visitors can drive to Skagway, which is 108 miles (174 km) south of Whitehorse on the South Klondike Highway. The highway passes through the town of Carcross, which played an important role the Klondike Gold Rush.

Listed below are the best places to camp in town and things to do in Skagway. 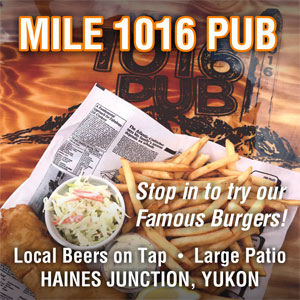 Skagway Convention & Visitors Bureau is located in the Arctic Brotherhood Hall, one of Skagway’s most interesting buildings. The facade of the building uses almost 9000 pieces of driftwood collected from the beaches in Skagway Bay.
Pick up a walking tour map for the city or trail maps for nearby hiking. The Skagway CVB website is an excellent resource for planning your stay in this historic little city.
907-983-2854 or 888-762-1898
www.skagway.com

On July 17, 1898, the “Portland” steamed into Seattle with “a  ton of gold” from the Klondike. The news electrified the world and sparked the most fantastic gold rush ever known.

In the latter part of July, the first boats of the stampede landed at Skagway  and the nearby town of Dyea. Tons of freight were lightered ashore on anything which would float and piled high in wild disorder. Horses and cattle were  dumped overboard to swim ashore. Everywhere there was confusion and chaos.  A sense of urgency prevailed. Hurry before the world pours in its thousands!  Hurry before the Yukon freezes!

In October, according to a Northwest Mounted Police Report of 1897, Skagway  “had grown from a concourse of tents to a fair-sized town with well-laid-out streets and numerous frame buildings, stores, saloons, gambling houses, dance  houses and a population of about 20,000.” Five thousand stampeders alone landed in February 1898, according to Customs Office records.

Two trails were used by the gold seekers to reach the Yukon River where crude boats were built for the  continuation of their journey to the Klondike, which was still a further 500 miles. The preferred trail was the Chilkoot, which was 33 miles long and began at the nearby town of Dyea. The second trail was the White Pass, which was 40 miles long and began at Skagway. It parallels the present-day route of the White Pass & Yukon Railway. Although the Chilkoot was harder to climb, it was favored because it was the shorter of the two.

Unspeakable hardships were endured by these early prospectors. The windswept summit of the Chilkoot Trail was so steep that the last 1,500 steps were chiselled out of solid ice. Day and night an unbroken chain of men four miles long crawled across the summit. Tlingit Indians earned as much as one dollar a pound packing  supplies.

In 1898 a 14-mile, steam-operated tramway was built which eased the burdens  of those able to pay.

Perhaps the greatest inhumanity on the White Pass Trail was suffered by the  poor pack horses. Over 3,000 animals used to cross the trail perished.  The animals plunged off the trail and died in tangled masses, or crumpled  in exhaustion, only to be trampled into the mud.

When gold strike stories about millions in loose gold began filtering out  of the Klondike, every adventurer, gambler and crook in Canada and the United States headed north. Unbridled lawlessness and terror characterized early-day Skagway. The most notable criminal in Skagway was Soapy Smith, a suave, Leadville-Denver  trained bunko man. Soapy’s band of crooks cardsharks and cutthroats literally  ran Skagway.

In 1898 a railroad right-of-way was blasted through the mountains, and in  1899 the White Pass & Yukon Railway was completed to Lake Bennett, 40 miles away. A year later saw the completion of the 110-mile railroad to Whitehorse.

The perilous Chilkoot Trail was rapidly abandoned in favor of the railway, and Dyea became a ghost town almost overnight.

In 1899, news of a gold discovery on the Bering Sea sparked a second stampede to Nome, and the Gold Rush of 1898 died almost as suddenly as it had begun. Skagway’s population dwindled to 800. The town lay dormant for almost half a century until the Second World War saw the building of the Alaska Highway. Once again Skagway sprang to life, this time as the terminus of the historic White Pass & Yukon Railway, which supplied the materials to build a highway.

Gold seekers have been replaced by visitors. Most of the town’s permanent  residents work in the shops, hotels, bars and cafes housed in the restored buildings, which line the main street.

The privately owned White Pass & Yukon Railway carried visitors and vehicles between Skagway and Whitehorse Yukon until 1982, when the railway shut down. It was reopened in 1988 as a tourist attraction and and has become one of the premier attractions in the north.

Downtown Skagway Alaska is a wonderful time capsule of a by-gone area. The meticulously maintained building facades are straight out of a movie set, with colorful buildings, wooden boardwalks for sidewalks, and proud reflections of the unique history Skagway played in the gold rush.

Many visitors ask what there is to do in Skagway, and although there is plenty of activities, just wandering the streets and finding its hidden treasures, is one of the most enjoyable.

Things to Do in Skagway Alaska

Anyone who visits Skagway, whether on a cruise ship or by road will be able to find something fun and exciting. Here are some of our favorite things to do in Skagway.

Not only is this one of the most popular tours in all of Alaska, but it’s also one of the most interesting. We can’t recommend this tour enough. Passengers travel across the White Pass on a narrow-gauge railway that parallels the trail followed by the frantic gold seekers in 1898.

En route, you will see panoramic views of Skagway and the head of Lynn Canal. Bridal Veil Falls with as many as 22 cataracts tumbling into a gorge.

This live musical event has entertained audiences with the tale of Jefferson Randolph “Soapy” Smith since the 1920s. Soapy was Alaska’s most notorious outlaw and reigned over Skagway during the wild days of the Klondike Gold Rush.

Liarsville Gold Rush Trail Camp and Salmon Bake is a fun experience for the whole family. It includes an all-you-can-eat feast in the forest that includes wild Alaskan-caught salmon.

A cast of sourdoughs and dance hall girls will entertain you with a hilarious melodrama and a poem by Robert Service. After teaching you the art of gold panning, try your own hand at panning for gold.

The Chilkoot Trail is probably the most famous trail in Alaska. It is the 33-mile trail used by gold seekers headed for the Klondike Gold Rush. It is maintained by both the U.S. and Canadian Park Services.
You need to have a permit to hike the Chilkoot as the number of hikers each year is limited. It is an amazing journey into the past and one of the most popular trails in the North. The trailhead is at Dyea a few miles from Skagway. It typically takes 3 to 5 days to complete.

Klondike Gold Rush National Historical Park was established to preserve and interpret the history of the Klondike gold rush of 1898. The Park in Alaska consists of the Chilkoot and White Passes, the former town-site of Dyea, and a portion of Skagway. Today the park has a visitor center in Skagway and administers the Chilkoot Trail and White Pass Trails.

Fortunately, the United States and Canada have been able to preserve a wealth of historic structures and artifacts within this unspoiled geographic setting. Visitors, particularly those that hike the Chilkoot Trail, are likely to see these last tangible reminders of the gold rush days: telephone wire and poles, boots, bedsprings, horseshoes, and rusty cookware, to name a few.

The park preserves a dozen gold rush-era buildings, forming the heart of the historic district in Skagway.