Chicken is located at mile 66.8 of the Taylor Highway, 58 miles southwest of Eagle and 78 miles from Tok.

If you are driving in from the Alaska Highway the road is usually in pretty good condition as it has mostly been reconstructed between Tetlin Junction on the Alaska Highway and Chicken.
The history of Chicken is rich and began with the discovery of gold, on Franklin Gulch, in 1886. Ten years later in 1896, Bob Mathieson made a major discovery on Upper Chicken Creek, staked his claim and built a cabin. 700 miners were thought to be working the area between 1896 and 1898. A post office was established in 1903 to serve a population of around 400. In 1906, Harvey Van Hook built the two-story Chicken Creek Hotel.

The Historic Town of Chicken was a hub of activity for the southern portion of the Fortymile Mining District. Many of the original buildings still stand including “Tisha’s Schoolhouse” made famous by the book “Tisha” about Anne Purdy’s life teaching there in 1927.

In 1939, the F.E. Company began acquiring claims and built a camp on Nora Bench. In 1953, they bought the town site and turned it into a camp for their dredging operation. They moved Dredge #4 (the Pedro Dredge) from Fairbanks to Chicken in 1959 and operated it until 1967. In 1998, after sitting idle for 31 years, the million pound dredge was moved in one piece to its present location. For tours of the Historic Town of Chicken and Tisha School House go to the Goldpanner Gift Shop. 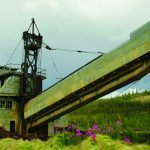