The village of Nenana is situated at the confluence of the Nenana and Tanana Rivers about halfway between Fairbanks and Denali National Park. The name Nenana means “a good place to camp between the rivers.”

The area was originally known as Tortella by the white community as they had difficulty with the pronunciation of the native word “Toghotthele,” which means “hill on the water.”

In 1902 the discovery of gold in Fairbanks brought increased activity to Nenana and in 1903 Jim Duke built a trading post/roadhouse to service the river traffic and trade with the native community.

Around 1905 a telegraph station was built by the Army Signal Corps as part of the network across Alaska and the Episcopal Church founded St. Mark’s Mission and the Tortella School a short distance upriver. Today, the restored log church is a favorite photo subject for visitors.

Nenana’s population grew dramatically with the building of the Alaska Railroad. The first surveyors arrived in 1916 and began building a dock to service the boat traffic on the two rivers.

President Warren J. Harding drove the golden spike at the north end of the Nenana rail bridge on July 15, 1923. After the completion of the railroad, there were 5,000 residents living in Nenana, however, an economic slump soon followed and by 1930 there were only 291. Today the economy is still based on its role as the center of rail-to-river barge transportation for the Interior of Alaska.

Nenana is famous for its Ice Classic, a lottery based on guessing when the ice in the Nenana River will break up in April or May of each year, a tradition since 1917.

Nenana Visitor Information Center log cabin is located at the corner of Parks Highway and the entrance to Nenana. 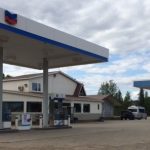